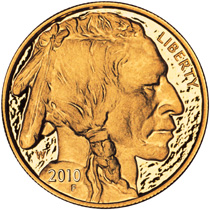 During the period covered by the latest US Mint sales report, prices were raised for most numismatic gold coins, and the price of gold reached a fresh all time high. The recently released 2011 Proof Gold Eagles continue to draw buyers, while the gold commemorative coins sold at an increased pace.

Sales of the 2011 Proof Gold Eagles remained somewhat robust for their second appearance in the weekly reports. For the individual one-quarter ounce option, sales were actually higher this week than in the debut week. The other product options saw the pace of sales fall from the prior week, but not by as significant a percentage as usually seen for newly released US Mint products.

Commemorative gold coins saw a boost in sales across all options. For the 2011 Army $5 Gold Coins, the US Mint sold 320 proofs and 105 uncirculated coins. For the 2011 Medal of Honor $5 Gold Coins, sales were 712 proofs and 300 uncirculated coins. Unlike the other numismatic gold products, these coins are offered at fixed prices that do not fluctuate from week to week. Initial pricing was determined at the start of the year when the price of gold was much lower, meaning the coins have become a better relative bargain as the price of gold has risen. Each commemorative $5 gold coin contains 0.242 troy ounces of gold.

While not included on this report, the US Mint separately provided updated sales figures for the recently released 2010-P Hot Springs Five Ounce Silver Uncirculated Coin. As of yesterday sales were approximately 25,000 out of the 27,000 mintage.

The full report of US Mint numismatic product sales appears following. These figures are compiled through May 1, 2011. The first number column represents total sales through the reporting date, and the second number column represents the change in sales since the last report. Figures followed by an asterisk (*) are no longer available for sale from the United States Mint. Figures in bold make their debut on this report. Currently available US Mint products can be found online at http://catalog.usmint.gov/