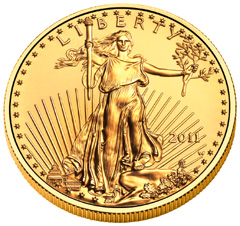 The US Mint began sales of the Vicksburg National Military Park 5 oz. Silver Uncirculated Coins on January 12, 2012. The coins had the lowest initial pricing point for the numismatic series to date. Through the reporting date of January 17, 2012, sales have reached 7,861 units out of the 35,000 maximum mintage. This falls below the debut sales level for the previous release featuring Olympic National Park, which came in at 8,662.

On January 10, 2012, the US Mint began sales of the 2012 America the Beautiful Quarters Silver Proof Set. These sets contain the five latest quarter designs struck in 90% silver. Initial sales for the product have reached 61,181. This amount is below the debut figures for last year’s set, which started at 78,054.

Within the sales reporting period, the Mount Hood National Forest 5 oz. Silver Uncirculated Coins sold out. These coins originally went on sale July 28, 2011, priced at $279.95 and remained available through two downward pricing adjustments. The last reported sales are 26,928. With this sell out, all of the 2010-dated numismatic ATB Five Ounce Silver Coins have sold out.

Around mid-day yesterday, the 2011-W Uncirculated Gold Eagle sold out. The sales figures for the product according to this report are 8,810. This number is significant as it may represent a new mintage low across all versions of the American Gold Eagle. It is possible that this may be the last sales figure the US Mint provides, or another figure may be provided next week. Final audited mintage figures generally aren’t available for months or years after the actual sell out.

The complete US Mint numismatic product sales report appears below. The figures are compiled through January 17, 2012. The first number column represents total sales through the reporting date, and the second number column represents the change in sales since the last report. Products with sales followed by an asterisk (*) are no longer available from the United States Mint. Products listed in bold make their debut on this report. Currently available US Mint products can be found online at http://catalog.usmint.gov/