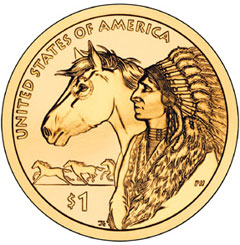 The 2012 Native American Dollar reverse design features the profile of a Native American and horse to represent the theme “Trade Routes of the 17th Century”. These coins were offered by the US Mint starting on April 26, 2012 in 25-coin rolls, 250-coin boxes, and 500-coin boxes from either the Philadelphia or Denver Mint. Across all options, total sales accounted for 967,775 coins. This is comfortably within the US Mint’s initial production of 5.60 million coins.

So far, the Native American Dollars are proving to be a slower seller than the Presidential Dollars. Product sales for the design featuring Chester Arthur had opened at 2,866,600. By the second week, sales had surpassed the US Mint’s initial production of 5.74 million coins. As of this week, total sales have climbed to 6,905,750 coins.

Other product debuts included the 2012 Presidential Dollar Proof Set at 146,097 units and the 2012 America the Beautiful Quarters Uncirculated Coin Set at 14,840 units. These figures compare to debuts for the prior year products of 163,129 and 14,622, respectively.

Some numismatic gold coins appeared stronger in this week’s sales report, possibly benefiting from a price decrease made effective last Wednesday. Across all options, the available First Spouse Gold Coins sold 117 units, compared to just 23 units in the previous sales report. Although numbers for the recently released 2012 Proof Gold Eagles were down compared to last week, sales didn’t see the dramatic slow down that many products have recently experienced by the second week of availability.

The complete US Mint numismatic product sales report appears below. The figures are compiled through April 30, 2012. The first number column represents total sales through the reporting date, and the second number column represents the change in sales since the last report. Products with sales followed by an asterisk (*) are no longer available from the United States Mint. Products listed in bold make their debut on this report. Currently available US Mint products can be found online athttp://catalog.usmint.gov/