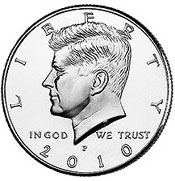 The newest sales report for United States Mint numismatic products includes the debut figures for the second 2010-dated product. The majority of the report, contains the 2009-dated products which continue to be offered for sale until this year’s versions are released.

The US Mint began sales of 2010 Kennedy Half Dollar bags and rolls on January 29, 2010. The debut figures indicate that 7,550 of the two roll sets were sold and 1,237 of the 200-coin bags were sold as of January 31, 2010. These circulation strike Kennedy Halves are not issued for circulation, but are only available through the US Mint’s numismatic bags and rolls program. Collectible versions of the coins will also be issued in the Mint’s annual sets.

Sales of the 2009 Gold Buffalo Proof Coin moved higher by 612 to bring the total sales to 45,501. The uptick in demand follows a price reduction which took place at the middle of last week. Meanwhile, sales of the Margaret Taylor First Spouse Coins erased some of the gains from previous weeks, either due to order cancellations or returns.