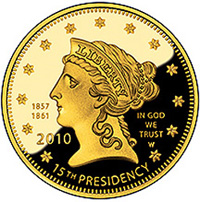 It was a relatively quiet week for United States Mint numismatic product sales. There have been no new 2011 product releases in the past week and sales were relatively subdued for the available prior year offerings. One of the bright spots on current and recent reports has been the James Buchanan’s Liberty First Spouse Gold Coin.

The obverse of Buchanan’s Liberty Gold Coin features a reproduction of the Liberty Head Quarter Eagle, originally designed by Christian Gobrecht. Under the requirements of the First Spouse Gold Coin Program, for any President who served without a spouse (with one exception), an image emblematic of the concept of Liberty is to be used for the obverse. The image is to be taken from a coin issued during the years of the Presidential term.

The use of the classic image of Liberty has struck a chord with collectors, resulting in higher sales for this particular issue of the broader series honoring First Spouses. Total sales since the Buchanan’s Liberty coin went on sale September 2, 2010 have reached 11,442, across proof and uncirculated options. This exceeds the total sales for any of the 2010 issues currently available, as well as the final sales for any of the 2009 issues.

Under US Mint procedures, the James Buchanan’s Liberty First Spouse Gold Coin should remain available for sale until September 1, 2011 (the start of sales for the Lucy Hayes First Spouse Gold Coin) or until the maximum authorized mintage of 15,000 coins has been sold. To reach the maximum authorized mintage, sales would have to continue at a pace of about 500 coins per month. In the latest week, 237 coins were sold.

The complete US Mint numismatic sales report follows. Figures are compiled as of January 23, 2011. The first number column represents total sales through the reporting date, and the second number column represents the change in sales since the last report. Figures which are followed by an asterisk (*) are no longer available for sale from the United States Mint. Currently available US Mint products can be found online at http://catalog.usmint.gov/