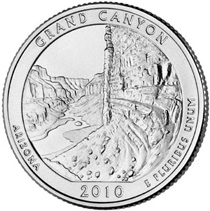 Two newly released products make their debut on the latest US Mint sales report. Other highlights include the continued strength in the sales of 2010 Proof Gold Buffalo coins and a slow for Buchanan’s Liberty Gold Coins.

Sales of the Grand Canyon National Park Quarter bags and rolls began at the US Mint on September 20, 2010. Through the reporting date of September 26, orders have been received for 23,172 of the two roll sets and 4,015 and 3,900 of the 100-coin bags from the Philadelphia and Denver Mints. Each of these figures represented a slight decline from the debut figures for the previous Yosemite Quarter products.

The US Mint began sales of the Presidential $1 Coin and First Spouse Medal Set featuring James Buchanan on September 23. Collectors have ordered 2,080 of the sets so far. Although this number seems low, it is actually a jump of about 55% from the prior release for the product type.

The 2010 Proof Gold Buffalo continued its recent pattern of stronger sales with 1,755 coins sold in the prior week, bringing total to 33,651. Sales for the product had been relatively sedate during the summer months, but in the past five weeks customers have ordered more than 7,000 coins. Along with the rising price of gold, recent news of the 2010 Gold Buffalo bullion coins sell out might bring more attention to the collectible proof option.

James Buchanan’s Liberty First Spouse Gold Coins, which have been closely watched by collectors, added sales of 487 coins this week, with orders concentrated on the proof version of the coin. Combined sales have now reached 9,055 out of the maximum mintage of 15,000.

The full US Mint numismatic product sales report follows. Figures are compiled as of September 26, 2010. The first number  column represents total sales through the reporting date, and the second  number column represents the change in sales since the last report.  Figures which are followed by an asterisk (*) are no longer available  for sale at the US Mint.

Note: the Yosemite Quarter Two Roll Set shows a big drop, but this appears to be due to misreported numbers last week.