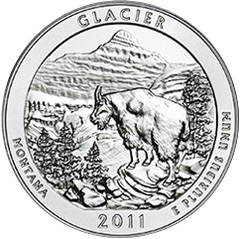 The latest US Mint numismatic sales report includes the debut figures for the Glacier National Park Five Ounce Silver Uncirculated Coins. During the period covered by the report, the US Mint also released the 25th Anniversary Silver Eagle Set, which sold out of the maximum 100,000 production limited within hours of the initial release.

The 2011-P Glacier Five Ounce Silver Uncirculated Coins went on sale October 25, 2011, representing the seventh numismatic release for the over-sized silver coin series. Out of a maximum authorized mintage of 35,000, the US Mint has received orders for 10,680 coins. This was a higher total than the previous release for the design featuring Gettysburg National Military Park, but much slower than each of the 2010-dated releases.

Within a comparable period, the initial sales for the previous releases were 25,000 (Hot Springs), 24,626 (Yellowstone), 20,511 (Yosemite), 19,300 (Grand Canyon), 14,759 (Mount Hood), and 9,549 (Gettysburg). The uptick in sales may represent a base level of demand for the collector series. It may also be the impact of precious metals prices. Whereas the Gettysburg design was released during a week of sharply falling silver prices, the Glacier design was released as silver prices rose.

The 2011 Proof Platinum Eagle saw another week of relatively strong sales. The US Mint received orders for 538 coins, bringing the total to 11,065 out of the 15,000 maximum. Weekly sales for this offering have been higher than typical following a price decrease which took place in the first week of October. The price is expected to increase tomorrow as the average market price of platinum has moved to a higher range.

The full US Mint numismatic product sales report appears below. The figures are compiled through October 31, 2011. The first number column represents total sales through the reporting date, and the second number column represents the change in sales since the last report. Products with sales followed by an asterisk (*) are no longer available from the United States Mint. Products listed in bold make their first appearance on this report. Currently available US Mint products can be found online at http://catalog.usmint.gov/