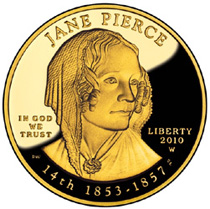 The latest US Mint numismatic product sales report shows a jump in sales for the available First Spouse Gold Coins, representing the highest weekly sales level in about two months. Also, the debut figures for the recently released 2010 Kennedy Half Dollar bags and rolls are available.

In the middle of the reporting period, the United States Mint raised the prices for most numismatic gold coins, in line with the increased market value of gold. Collectors may have placed heavier orders ahead of the price change in order to take advantage of the lower prices. Across all available options, the US Mint sold 759 of the one-half ounce gold coins, compared to 380 in the previous period.

Another factor at play might be the unexpected sell out of the proof version of the James Buchanan’s Liberty First Spouse Gold Coin. The US Mint struck fewer coins than the maximum authorized mintage based on demand forecasts, and this proved to be short of meeting demand for the entire sales cycle. If the US Mint underestimated the number of coins to produce for this issue, it may also be possible for other issues.

The 2011 Kennedy Half Dollar products make their first appearance on this week’s report. The denomination has not been struck for circulation during the past ten years, but only minted in quantities needed to meet collector demand. Sales from February 15 through the reporting date of February 20 included 8,841 of the two roll sets and 2,114 of the 200-coin bags.

The full US Mint sales report for numismatic products appears below. Figures are compiled through February 20, 2011. The first number column represents total sales through the reporting date, and the second number column represents the change in sales since the last report. Lines which appear in bold represent products which have debuted on this report. Figures which are followed by an asterisk (*) are no longer available for sale from the United States Mint. Currently available US Mint products can be found online at http://catalog.usmint.gov/