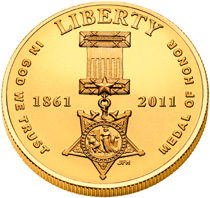 The latest weekly report of United States Mint numismatic product sales shows a broad slow down in collector purchases across nearly every product class. The most pronounced declines were experienced for the recently released 2011 commemorative coins and the 2011 annual coin sets.

Compared to the previous report, the weekly sales of the 2011 Army Commemorative $5 Gold Coin fell from a combined 1,454 to just 380 coins. The 2011 Medal of Honor $5 Gold Coin saw weekly sales fall from 4,567 to 1,602. Sales of the silver dollars for each of the programs also showed big drops.

The general slow down comes during a gap within the US Mint’s product schedule. The last product to be released was the Yosemite Quarter Three Coin Set on March 3, and the next product scheduled to be released is the 2011 America the Beautiful Quarters Proof Set on March 17. Looking further ahead, the 2011 Native American Dollar Rolls are scheduled to go on sale March 28, the America the Beautiful Quarters Silver Proof Set will go on sale March 29, and the Andrew Johnson $1 Coin Cover will go on sale March 31.

Two products that collectors hope may be released during March are the Eliza Johnson First Spouse Gold Coin and the collector versions of the 2010 America the Beautiful 5 oz. Silver Coins. The former was initially scheduled for March 3, but changed to “TBD” shortly before that date. The latter was previously indicated to be available during the first quarter of this year, which suggests a release before the end of the month.

The full US Mint numismatic product sales report appears below. The figures are compiled through March 13, 2011. The first number column represents total sales through the reporting date, and the second number column represents the change in sales since the last report. Lines which appear in bold represent products which have debuted on this report. Figures which are followed by an asterisk (*) are no longer available for sale from the United States Mint. Currently available US Mint products can be found online at http://catalog.usmint.gov/