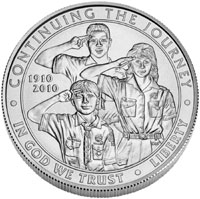 The Boy Scouts of America Centennial Silver Dollars continue to be strong sellers at the United States Mint, although the pace of sales has dipped from the strong opening seen last week. This US Mint sales report also includes the debut figures for the recently released Millard Fillmore Presidential Dollar Coin Cover.

The Boy Scouts Silver Dollars added a combined 51,844 coins in the latest week, bringing the total to 266,517. The maximum mintage as stipulated by the authorizing legislation is just 350,000 coins, meaning that the US Mint has already sold 76.1% of the maximum. The breakdown of sales is 179,976 proof coins and 86,541 uncirculated coins.

On April 2, 2010, the US Mint released the Millard Fillmore $1 Coin Cover. This product recorded sales of 17,833 through April 4, 2010. This latest release in the American Presidency $1 Coin Cover series had a lower maximum production of 32,000 units and a higher price per cover of $15.95. The last offered Presidential Dollar cover featuring Zachary Taylor had opened with sales of 18,705.

The full weekly United States Mint sales report appears below. Figures are compiled through April 4, 2010. The first number column indicates total sales through the reporting date and the second number column represents the change in sales since the last report. Figures which are followed by an asterisk (*) are no longer available for sale at the US Mint.