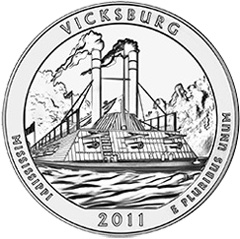 As the market price of silver moved higher, some collectors shifted their focus to the United States Mint’s numismatic silver products, particularly those which recently had their prices decreased. This was evidenced by the numbers in the latest weekly US Mint numismatic product sales report.

The United States Mint offers numismatic versions of the America the Beautiful Five Ounce Silver Coins, featuring a special finish created through a vapor blasting technique and the “P” mint mark. Mintages have been limited to 27,000 for the 2010-dated releases and 35,000 for the 2011-dated releases. Initially, the coins were priced at $279.95 each, but this was later reduced to $229.95 on October 7, 2011, and finally to $204.95 effective December 27, 2011. On the date of the last price decrease, the market price of silver was around $28 per ounce.

Despite an increase in the market price of silver by about $5 per ounce, the US Mint has continued sales at the lowest price level. More collectors seem to have taken notice of the fact. In the latest week, the US Mint sold 3,563 coins across the four available designs. This is up from 2,931 coins sold in the previous week.

The 2011-W Uncirculated Silver Eagle similarly had its price decreased effective December 27, 2011. Since that date, the one ounce coins with an uncirculated finish and the “W” mint mark have been priced at $45.95 each. In the latest week, collectors placed orders for 4,455 of the coins, up from 3,062 in the previous week.

Elsewhere in the sales report, the number of 2012 America the Beautiful Quarters Silver Proof Sets sold has quickly deflated. The product debuted two weeks ago with sales of 61,181. The following week sales registered at 8,048. For the current week, sales moved up by only 1,190.

The complete US Mint numismatic product sales report appears below. The figures are compiled through January 30, 2012. The first number column represents total sales through the reporting date, and the second number column represents the change in sales since the last report. Products with sales followed by an asterisk (*) are no longer available from the United States Mint. Currently available US Mint products can be found online at http://catalog.usmint.gov/