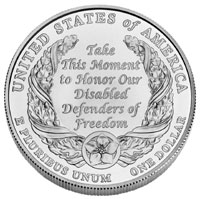 This week’s sales report for United States Mint numismatic products includes the debut figures for the 2010 American Veterans Disabled for Life Silver Dollars. This is the first of two commemorative coin programs for the year, with the sales for the second program featuring the Boy Scouts Silver Dollar expected to begin on March 23, 2010.

The American Veterans Disabled for Life Dollars, which went on sale February 25, 2010, sold a combined 98,358 coins, representing just over 28% of the maximum authorized mintage of 350,000 coins. The total was broken down as 32,149 of the uncirculated version of the coin and 66,209 of the proof version of the coin. Sales for commemorative coins are generally the heaviest during the first month of sales when discounted prices are available.