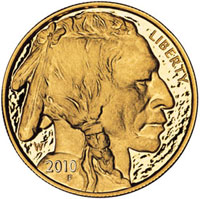 This week’s report of the United States Mint’s numismatic product sales includes an updated total for the recently released 2010 American Buffalo Gold Proof Coin. Other highlights include the latest figures for the 2009 annual sets and 2009 Lincoln Cent Two Roll Sets, which will go off- sale later today.

The 2010 Proof Gold Buffalo went on sale June 3, 2010, priced at $1,510 per coin with no stated maximum mintage and no household ordering limits. As of the reporting date of June 13, 2010, the US Mint has recorded sales of 17,465 coins. This number represents a slower pace of sales than last year’s one ounce proof Gold Buffalo coin offering, which sold 19,468 during the first three days of availability. Nonetheless, this amount has nearly reached the total sales for the one ounce 2008 Proof Gold Buffalo, which sold 18,863 coins across all product options.

Sales of the 2009 annual sets and 2009 Lincoln Cent Two Roll Sets will concluded today at 5:00 PM ET. The impending unavailability has resulted in an uptick in demand for the products. Total sales for the 2009 Proof Set have reached 1,477,967, the 2009 Silver Proof Set has sold 694,406, and the 2009 Uncirculated Mint Set has sold 774,844 units. Each of these sets contains the four different 2009 Bicentennial Lincoln Cents struck in a composition of 95% copper.

The 2009 Lincoln Cent Two Roll Sets have sold 294,083 for the “Professional Life” design and 264,700 for the “Presidency” design. These rolls contain circulation quality coins struck in the standard zinc based composition.

The 2010 Boy Scouts Silver Dollar is now showing a combined sales total of 350,472. This is above the maximum authorized mintage of 350,000, but the coins still remain available for ordering on the US Mint’s website.

Update: After publishing this article, revised sales figures for the 2010 Boy Scouts Silver Dollar were released. The revised numbers are 105,000 uncirculated coins and 243,500 proof coins for a combined total of 348,800.

The full weekly sales report follows. Figures are compiled through June 13, 2010. The first number column indicates total sales through the reporting date and the second number column represents the change in sales since the last report. Figures which are followed by an asterisk (*) are no longer available for sale at the US Mint.