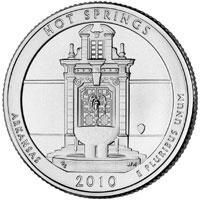 This week’s report of the United States Mint’s numismatic product sales includes the debut figures for the 2010 America the Beautiful Quarters Silver Proof Set. Other products related to the new quarter series featuring National Parks and sites from the states, territories, and the District of Columbia also warrant some attention.

The 2010 America the Beautiful Quarters Silver Proof Set went on sale May 27, 2010. Through the sales reporting date of May 30, the US Mint has recorded sales of 73,756 sets. This is actually just a shade below the debut sales figures for the less expensive clad version of the set, which debuted at 75,558. In the current report, the clad set added sales of 17,578 to bring the total sales to 111,527.

The US Mint’s numismatic bags and rolls offered for the Hot Springs National Park Quarter have continued to sell at a steady rate. The sales level for the two roll set is now above the total sales recorded for the previous Northern Mariana Islands Quarters. Collectors may be drawn to the offering due to the recently reported preliminary production figures for the quarter, which were the lowest in decades. Also, the lack of 250-coin bag offerings may be contributing to higher sales of the lower count options available.

A large adjustment was made for the total sales of the Margaret Taylor First Spouse Gold Coin, bringing the total sales back below the level of the subsequently issued Abigail Fillmore coin.

The complete weekly sales report is shown below. Figures are compiled through May 30, 2010. The first number column indicates total sales through the reporting date and the second number column represents the change in sales since the last report. Figures which are followed by an asterisk (*) are no longer available for sale at the US Mint.