The United States Mint began sales of the 2011 Proof Set on January 11, 2011. The annual set includes 14 different coins across six denominations, struck in proof quality at the San Francisco Mint. 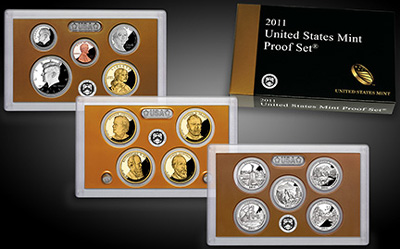 This year’s set is released earlier than recent years. The US Mint previously announced that they would begin sales of their most popular annual sets in January, to allow customers to update their collections earlier and purchase the sets for gift giving occasions throughout the year.

The fourteen coins are housed in three separate protective lenses and placed within an outer cardboard box. A certificate of authenticity is also included.

The 2011 United States Mint Proof Set is priced at $31.95 each, plus shipping and handing. Orders may be placed online at http://catalog.usmint.gov/