On February 18, 2010, the United States Mint released into circulation the first Presidential Dollar Coin of 2010, featuring Millard Fillmore. This coin represents the thirteenth overall release in the series honoring the former Presidents of the United States of America. 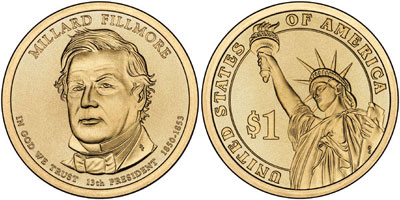 The Millard Fillmore Presidential Dollar features his portrait on the obverse with inscriptions indicating “Millard Fillmore”, “13th President”, and the years of his term “1850-1853”. He had initially been elected to serve as Zachary Taylor’s Vice President, and became President after Taylor’s death in 1850. The reverse of the coin features a rendition of the Statue of Liberty and inscriptions “United States of America” and “$1”. The edge of the coin includes the motto “E Pluribus Unum”, the date and mint mark of the coin, and thirteen stars. Both the obverse and reverse were designed by Don Everhart.

An official launch ceremony was held at Moravia central School in Moravia, New York on February 18. The ceremony was co-hosted by the United States Mint and the Cayuga-Owasco Lakes Historical Society. United States Mint Deputy Director Andrew Brunhart officially introduced the coin stating, “Each new Presidential $1 Coin is an opportunity to learn the stories of men like Millard Fillmore, who served in our Nation’s highest office.”

On the same date at 12:00 Noon ET, the United States Mint began sales of 25-coin rolls of Millard Fillmore Presidential Dollars from the Philadelphia or Denver Mint. These rolls are packaged in custom designed packaging including the President’s name, mint mark, and face value of the contents. The rolls are priced at $35.95 each plus shipping and handling.