The United States Mint has released the 2015 Jacqueline Kennedy First Spouse Gold Coin. The coin honors the wife of President John F. Kennedy and First Lady of the United States from 1961 to 1963. 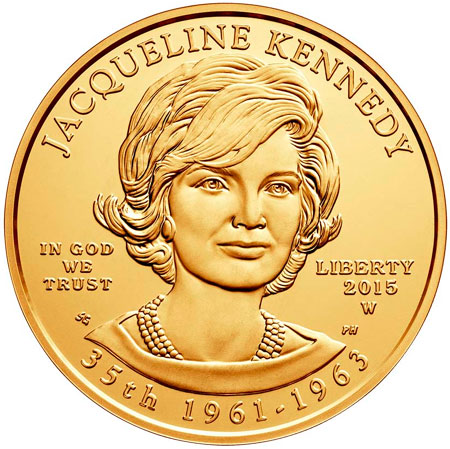 The obverse of the coin features a portrait of the First Lady surrounded by the inscriptions “Jacqueline Kennedy”, the motto “In God We Trust”, “Liberty”, “2015 W”, the order of the Presidency “35th”, and the dates served “1961-1963″. The obverse was designed by United States Mint Artistic Infusion Program (AIP) Designer Susan Gamble and engraved by United States Mint Sculptor-Engraver Phebe Hemphill. 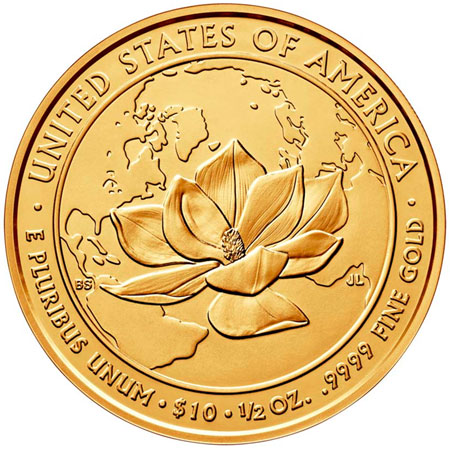 The reverse features the saucer magnolia Mrs. Kennedy chose to be planted in the White House garden and near the eternal flame at her husband’s grave at Arlington National Cemetery. The petals stretch across the globe, its tips connecting the points of some of her most notable diplomatic visits. The inscriptions read “United States of America”, “E Pluribus Unum”, “$10″, and “1/2 oz. .9999 Fine Gold”. The reverse was designed by  AIP Designer Benjamin Sowards and sculpted by United States Mint Sculptor-Engraver Jim Licaretz.

Each coin is struck in 24 karat .9999 fine gold with a weight of one-half troy ounce. The diameter is 26.50 mm and the thickness is 1.88 mm. Both proof and uncirculated versions are available with a combined maximum mintage of 30,000 pieces. The ratio of proof to uncirculated coins will be determined based on customer demand.

The fourth and final release of the First Spouse Gold Coin Program for this year will honor Claudia Taylor Johnson. The series will continue in 2016 with issues honoring Patricia Nixon, Betty Ford, and Nancy Reagan.