The United States Mint has started accepting orders for the first release of the year for the First Spouse Gold Coin Program. The coin honors Florence Harding, the wife of President Warren G. Harding and the First Lady of the United States from 1921 to 1923. 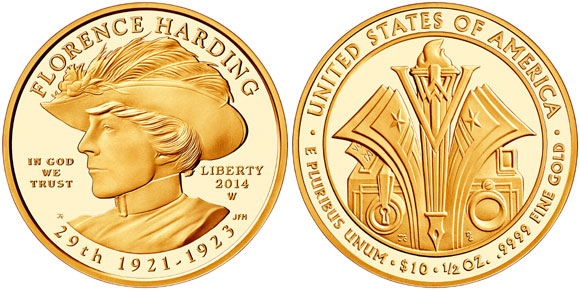 The obverse design of the coin features a portrait of Florence Harding surrounded by the required inscriptions. Her name “Florence Harding” appears above, with the motto “In God We Trust” to the left, “Liberty” and the date “2014” to the right, and the order of the Presidency “29th” and dates served “1921-1923” below. The obverse was designed by Artistic Infusion artist Thomas Cleveland and sculpted by sculptor-engraver Don Everhart.

The reverse of the coin contains an image bringing together multiple facets of the First Lady’s life. At center is a torch with the letters WWV at the top and transforming to a pen at the base. Mrs. Harding had championed the cause of World War I veterans and engaged in extensive correspondence with veterans, their spouses, and widows. The image of a camera appears to the right of the design, as she had orchestrated photo opportunities supporting her husband’s campaign. A ballot box appears at left, representing her distinction as the first First Lady to have cast a vote for a presidential candidate, her husband. Inscriptions include “United States of America”, the motto “E Pluribus Unum”, and an indication of the precious metal weight and purity. The reverse was designed by Thomas Cleveland and sculpted by sculptor-engraver Don Everhart.

Each coin is struck in .9999 fine, 24 karat gold with a weight of 1/2 troy ounce and diameter of 26.50 mm. The coins are available in either proof or uncirculated versions with a maximum mintage of 10,000 pieces established across both versions. The ratio of proof to uncirculated coins will be based on customer demand.

Initial pricing for the coins is $865 for the proof version and $845 for the uncirculated version. This pricing is established under the US Mint’s flexible pricing policy for gold numismatic coins and based on an average market price of gold within the $1,300 to $1,349.99 range. The pricing will be subject to potential weekly adjustment based on the average market price of gold.