The First Spouse Bronze Medals were authorized under Public Law 109-145, the same law that authorizes the First Spouse Gold Coin series. A section of the law allows the Secretary of the Treasury to strike and issue bronze medals which bear the likeness of the gold coins. Since 2007, the US Mint has offered the 1-5/16 inch bronze medals individually and as an annual set. 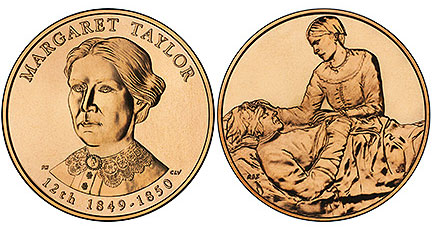 The Margaret Taylor Bronze Medal features a portrait of the First Lady on the obverse and a scene of her caring for a wounded soldier during the Seminole War on the reverse. The individual medal was released on December 3, 2009 to coincide with the release of the gold coin. The bronze medal is priced at $3.50 each. 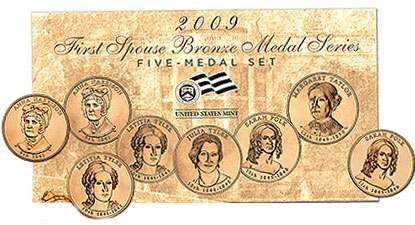 The 2009 First Spouse Bronze Five Medal Set contains each of the bronze medals issued this year honoring the First Ladies. This includes Anna Harrison, Letitia Tyler, Julia Tyler, Sarah Polk, and Margaret Taylor. The five medals are packaged in mylar and inserted into a folded card and envelope with information about the product. The set is priced at $15.95.