The United States Mint has released the 2015 Bess Truman First Spouse Gold Coin. Struck in one-half ounce of 24 karat gold, the coin honors the wife of President Harry S. Truman and First Lady of the United States from 1945 to 1953. 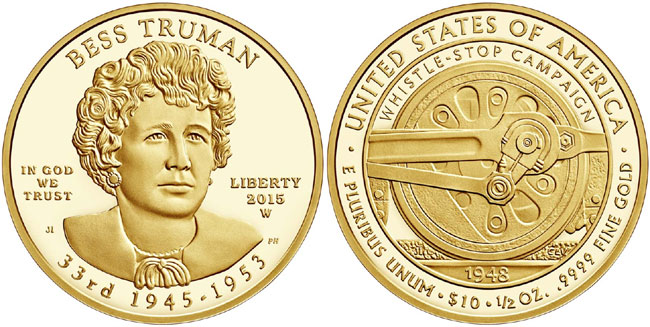 The reverse design features a locomotive wheel moving along railroad tracks, representing Mrs. Truman’s support for her husband during his 1948 whistle stop campaign trip for re-election as president. An inscription above reads “Whistle-Stop Campaign” with the date “1948” below. Additional inscriptions within the outer ring read “United States of America”, “E Pluribus Unum”, “$10”, and “1/2 oz. .9999 Fine Gold”. The reverse was designed by AIP Designer Joel Iskowitz and sculpted by United States Mint Sculptor-Engraver Charles Vickers.

Each coin is struck in 24 karat .9999 fine gold with a weight of one-half troy ounce. The diameter is 26.50 mm and the thickness is 1.88 mm. Both proof and uncirculated versions are available with a combined maximum mintage of 10,000 pieces. The ratio of proof to uncirculated coins will be determined based on customer demand.

Initial pricing for the coins was established at $790 for the proof version and $770 for the uncirculated version. Price levels for the coins is subject to potential weekly adjustments.