Today, May 13, 2010, the United States Mint began accepting orders for the 2010 America the Beautiful Quarters Proof Set. This set includes collectible proof versions of all five of the different quarters that will be issued for the year.

The America the Beautiful Quarters series features rotating reverse designs portraying a different National Park or national site from each state, U.S. territory, and the District of Columbia in the order federally designated. The first coin of the series featuring Hot Springs National Park was launched into circulation on April 20, 2010. 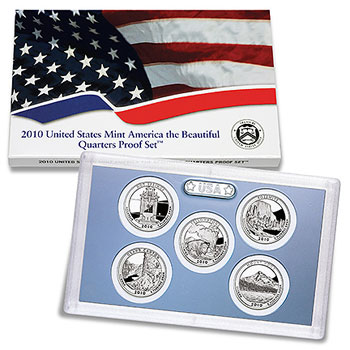 The proof versions of the coins are not issued for circulation, but sold by the United States Mint within special collector sets. Proof coins are created using a process which involves striking specially prepared proof blanks multiple times with highly polished dies. This results in extraordinarily brilliant coins with sharp relief.  Modern proof coins have a cameo appearance with frosted, sculpted foregrounds against mirrored backgrounds.

The five coins are packaged in a protective plastic lens and placed within an illustrated card board box. Each set also comes with a certificate of authenticity signed by the Director of the United States Mint.

These sets are priced at $14.95 each and can be ordered from the United States Mint at http://www.usmint.gov/catalog