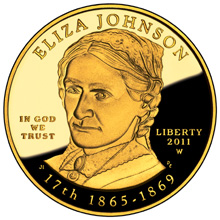 Prices were reduced for the United States Mint’s available numismatic gold coins, as the average weekly gold price slipped below the $1,500 level. After a string of price increases, the reduction may be welcome news for some collectors.

This year price increases have taken place on February 16, March 2, April 13, and April 27. The final increase had brought price levels to their highest levels on record, where they had remained until earlier today.

The US Mint utilizes a flexible pricing policy for certain gold and platinum numismatic coins that allows adjustments to be made as often as weekly in response to changing precious metals prices. The average London Fix price from the previous Thursday AM to the current Wednesday AM is calculated. If the average moves into a different $50 increment and the Wednesday PM price agrees directionally, then product prices are adjusted.

The new prices for the First Spouse Gold Coins, 2011 Proof Gold Eagles, and 2011 Uncirculated Gold Eagle are shown below.

The average gold price for the latest period will also establish the initial pricing for the 2011 Proof Gold Buffalo, scheduled to be released tomorrow. These coins contain one troy ounce of 24 karat gold and will be priced at $1,760 each.

Higher precious metals prices have had a dramatic impact on affordability of certain collectible coin series. When the First Spouse Gold Coin series was launched in mid-2007, the initial releases featuring Martha Washington and Abigail Adams were priced at $410.95 each, for the uncirculated version of the coins. The latest release featuring Eliza Johnson was initially priced at $916.00 for the uncirculated version. Even after today’s reduction to $891.00, the coins are still priced at 116% of the initial level.