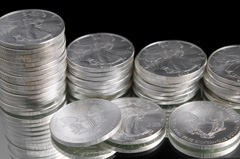 On Thursday, the US Mint notified its primary distributors that it was immediately raising the premium it charged for the bullion-issue Silver Eagles by 50 cents per coin.  The increase brings the total premium that primary distributors pay to $2.00 above spot, or about 9.1%.  Almost certainly, there will be a quick increase in the buy and sell prices at which common-date earlier Silver Eagles trade.

In my September 10, 2010 CoinUpdate column I had speculated that the US Mint would be likely to raise its premium before the release of the 2011-dated coins in January.  I further anticipated that the premium could rise to as much as 10% above silver value.  While the Mint did increase the premium yesterday, I think there is still a possibility of another hike announced with the January release of next year’s coins.

I have never been a fan of Silver Eagle dollars as a way to acquire bullion-priced silver, as I considered its previous premium to be just too high to represent good value.  Instead, I recommended the purchase of lower premium silver products, especially US 90% Silver Coin.  Despite the lack of enthusiasm on my part, my company has been selling about 1% of the entire mintage of these coins for the past few years.

My main reason for speculating in the September 10 column that the Mint might raise the premium on Silver Eagles was that a fixed premium above silver had become a much smaller percentage premium as the spot price of silver had risen from the $5 range to current levels.

Let me give you another reason why I am not a fan of Silver Eagles.  In late 1997, Warren Buffet’s Berkshire Hathaway purchased almost 130 million ounces of silver in the London market, for delivery in March 1998.  The price of silver was under $6.00 at the time the purchase was revealed.  The news stunned investors, with the result that silver prices started to rise.

At the time, the sellers of this silver did not expect Berkshire Hathaway to demand physical delivery, with the result that many of them had simply traded paper positions to cover themselves.  When it became obvious in early 1998 that Berkshire Hathaway was insisting on physical delivery, the sellers who only held paper positions were caught short.  In their scramble to find actual silver for fulfill their obligations, they bid up the spot price of silver.

Silver deliverable in London must be at least .9999 fine, so desperate sellers eventually bought the less pure .999 bars off the COMEX, and then paid to have them refined to the higher standard and have them shipped over to London.  The squeeze was so tight just before the delivery deadline that the London silver price rose to about 35 cents higher than the COMEX price.  Silver reached a peak of about $7.25 on the COMEX and around $7.60 in the London market.

There were substantial sellers completely unable to make delivery by the due date.  At the very last moment, Warren Buffet agreed to give sellers another six months to make delivery.  I have heard, but cannot verify, that Berkshire Hathaway was paid about 50 cents per ounce in return for granting the delay in delivery.

During this episode, the spot price of silver rose about 20%, but owners of Silver Eagles realized almost none of this appreciation.  I would not be surprised if Silver Eagles again lagged the rise in the silver spot price, probably with worse results for owners than if they had purchased US 90% Silver Coin or pure ingots and bars.

Within a few weeks, it will be time for the US Mint to stop production of 2010-dated Silver Eagles so that it can start striking the 2011-dated coins.  With the new higher premiums on existing Silver Eagles, and the record high mintage this year, I still do not consider them the best option for those looking to own physical silver.  Even if the Mint pushes through another premium increase within three months, I doubt that would generate enough benefit to offset the risk of lower premiums as the price of silver continues to climb.