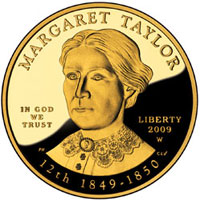 The US Mint calculates the average weekly price of gold based on the London Fix prices from the prior Thursday AM to the current Wednesday AM. If the calculated average moves across ranges established at $50 increments, then a pricing adjustment is made around mid-morning on Wednesday.

This is the second adjustment to take place during 2010. The first price adjustment took place on January 27, 2010 when prices were decreased. The current adjustment affected eleven different products, which had their prices raised either $25 or $50 based on the amount of gold content.

The 2009 First Spouse Gold Coins featuring Anna Harrison, Letitia Tyler, Julia Tyler, Sarah Polk, and Margaret Taylor had their prices raised from $704 to $729 for proof coins and $691 to $716 for uncirculated coins. Each of these coins contains one-half ounce of gold. The 2009 Gold Buffalo Proof Coin had its price raised from $1,360 to $1,410. Each coin contains one ounce of gold.

In recent weeks, the sales of the US Mint’s numismatic gold coins had experienced increased sales as the price of gold rose and product prices held steady. The most recent weekly sales report showed strong interest in the Anna Harrison First Spouse Gold Coin.