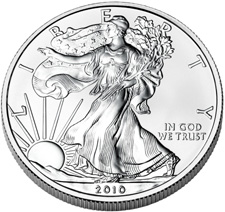 Effective October 1, 2010, the United States Mint has increased the premium charged to their network of authorized purchasers for American Silver Eagles from $1.50 to $2.00 per coin. Authorized purchasers were notified of the increase by memo sent yesterday afternoon.

The United States Mint does not sell American Silver Eagle bullion coins directly to the public, but distributes the coins through a network of Authorized Purchasers, who resell the coins to other bullion dealers, coin dealers, and the public, as well as facilitate a two way market.

Authorized purchasers may place orders for a minimum of 25,000 of the ounce one coins, with purchases above the minimum allowed in 500 ounce increments. Coins are packaged in semi-clear plastic tubes with 20 of the one ounce silver coins to a tube. A quantity of 25 tubes (500 coins) are placed within molded plastic shipping container, commonly referred to as a Silver Eagle Monster Box.

The price for American Silver Eagles sold to Authorized Purchasers is determined based on the silver content plus a premium. Under current procedures, the pricing of coins is established on the first business day following the day of order, with the premium now set at $2.00 per coin.

According to statements provided by Michael White of the United States Mint, the reason for the increase was to meet the program’s statutory requirement to operate at no net cost to the taxpayer.

Authorized by Congress in 1985, the American Eagle Silver Bullion Coin Program’s enabling legislation, Public Law 99-61, requires the Secretary to sell the coins to the public at a price equal to the market value of the bullion, plus the cost of minting, marketing and distributing such coins (including labor, materials, dies, use of machinery and promotional and overhead expenses).