Today the United States Mint unveiled the new reverse design to be featured on the 2009 Proof American Platinum Eagle. Details related to the upcoming release of the coins were also provided. 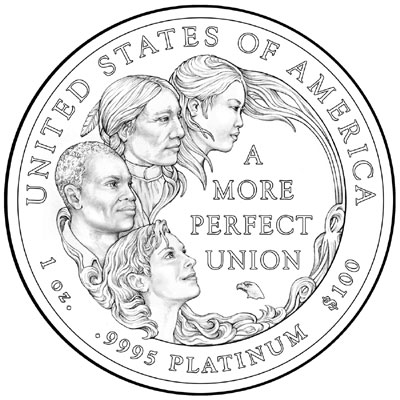 Starting this year, the United States Mint will begin a new six year program which commemorates the core concepts of American Democracy on the reverse of the collectible American Platinum Eagle. The concepts will be represented through the six principles of the Preamble of the United States Constitution. The themes used are inspired by narratives written by John G. Roberts, Chief Justice of the United States. The complete series will include the following:

The 2009 Proof Platinum Eagle design depicts four faces with clothing and hair weaving together. This is intended to represent the diversity of the Nation and symbolize the principle “To Form a More Perfect Nation.” The reverse was designed by US Mint Artistic Infusion Program Master Designer Susan Gamble and sculpted by US Mint Sculptor-Engraver Phebe Hemphill.

The obverse of the coin will feature the Statue of Liberty, as designed by US Mint Chief Engraver John Mercanti. This design has been used as the obverse of all collectible and bullion American Platinum Eagles since first offered in 1997.

The United States Mint will begin sales of the one ounce 2009 Proof Platinum Eagle on December 3, 2009 at 12:00 Noon ET. The coins will be priced based on the average price of platinum for the preceding week. If the average price remains within the $1,350 to $1,449.99 range, then the coins will be priced at $1,692.00 plus applicable shipping and handling.

A maximum production of 8,000 coins has been set for the offering. The coins will be subject to an ordering limit of five coins per household.