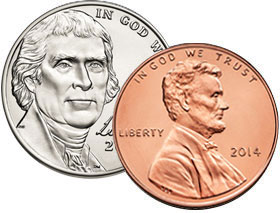 The nickel is currently struck in 25% nickel and 75% copper with a weight of 5 grams. Metal costs for this denomination decreased for the year as lower spot prices for copper offset higher spot prices for nickel. Increased production also served to spread fixed costs over more units.

During the 2014 fiscal year, the US Mint distributed to Federal Reserve Banks 7.92 billion cents with a face value of $79.2 million and 1.211 billion nickels with a fave value of $60.5 million. Since the cost to produce and distribute each denomination exceeded its face value, the cent generated negative seigniorage or a loss of $52.9 million and the nickel generated a loss of $37.6 million. During the year, the dime and quarter were produced and distributed for less than their face values. These two denominations yielded positive seigniorage or gains of $135.2 million and $270.5 million, more than offsetting the losses generated by the cent and nickel.

This represents the ninth consecutive year that the cost to produce and distribute the cent and nickel have exceeded their face values. After peaking at a cost of 2.41 cents and 11.18 cents in 2011, the cost for the denominations has shown reductions for each of the past three years.

Under the authority granted by the Coin Modernization, Oversight, and Continuity Act of 2010, the United States Mint is currently conducting research and development activities with regards to alternative metallic compositions for circulating coins. In their most recent required biennial report, the Mint concluded that there are no metal compositions that reduce the manufacturing unit cost of the cent below its face value. The Mint tested various alternative compositions for the nickel and has indicated plans to continue tests for an 80% nickel and 20% copper alloy which would yield cost savings and represent a “seamless” material with no appreciable impact on the coin-accepting industry.