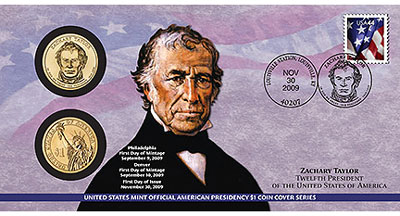 The two coins are mounted on a card and placed within an envelope illustrated with a portrait of Zachary Taylor. The 44-cent Flag postage stamp has the postmark “November 19, 2009, Louisville, KY” representing the first day the coins were released to the public.

The product is priced at $14.95 plus applicable shipping and handling. The overall production is limited to 40,000 units.