The United States Mint began sales of Yosemite National Park Quarter numismatic bags and rolls yesterday on July 26, 2010. This coin represents the third release of the new America the Beautiful Quarters Program, created to honor a national park or national site from each state, territory, and the District of Columbia in the order federally designated. 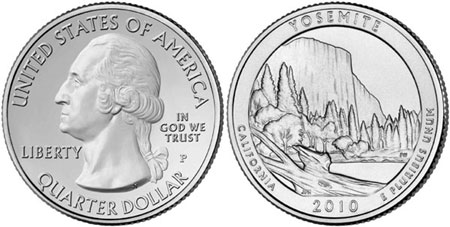 The 2010 Yosemite National Park Quarter features a depiction of El Capitan designed by Joseph Menna and sculpted by Phebe Hemphill. This rock formation rises over 3,000 feet above the Yosemite Valley floor and represents the largest monolith of granite in the world. The obverse of the quarter features the 1932 portrait of George Washington by John Flanagan.

Available products include 100-coin bags of Yosemite Quarters from either the Philadelphia or Denver Mints, or a two roll set including one 40-coin roll from each facility. The bags are priced at $35.95 each and the two roll sets are priced at $32.95 each. Products are packaged in canvas bags with descriptive tags or custom wrappers which display the name “Yosemite”, the abbreviation “CA”, the mint of origin, and the face value of the contents.

The bags and rolls will remain available for one year from the initial release date. Orders may be placed with the United States Mint online at http://usmint.gov/catalog

The product release date corresponds with the circulation release date of the Yosemite National Park Quarter. An official launch ceremony will be held later this week on July 29, 2010, 11:00 AM PT at the Valley Visitor’s center, Yosemite Village Loop, Yosemite, California. The ceremony will include music, guest speakers, and a coin exchange. The ceremony is open to the public and will also be webcast live at http://americathebeautifulquarters.gov/