The United States Mint has started accepting orders for the 2011 America the Beautiful Quarters Three Coin Set featuring the Vicksburg National Military Park Quarter. Similar sets have been released for the previous eight coins in the series.

The Vicksburg Quarter features a depiction of the U.S.S. Cairo on the Yazoo River as it would have appeared while serving in the Union Navy during the American Civil War. Inscriptions include “Vicksburg”, “Mississippi”, “2011”, and “E Pluribus Unum”. The reverse was designed by Thomas Cleveland and engraved by Joseph Menna. The obverse of the coin features a portrait of George Washington by John Flanagan. 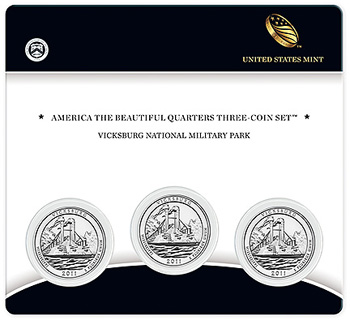 Priced at $14.95 each, the sets do not have a stated maximum product limit or ordering limit. Orders may be placed online at http://catalog.usmint.gov/