The United States Mint has started accepting orders for circulating quality examples of the 2014 Native American Dollar in rolls, bags, and boxes. This represents the latest release within the ongoing $1 coin series created to honor the contributions and accomplishments of Native Americans. 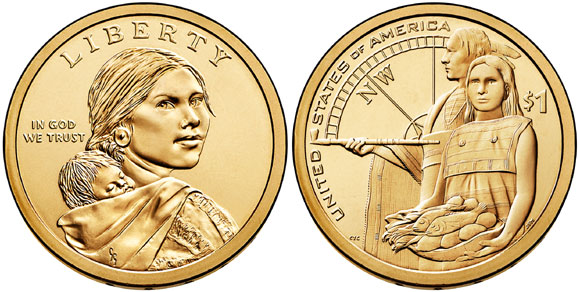 The 2014 Native American Dollar features a reverse design which commemorates the native hospitality ensuring the success of the Lewis and Clark expedition. A Native American man is shown offering a pipe, while his wife offers provisions of fish, corn, roots, and gourds. The background contains a stylized image of the face of William Clark’s compass highlighting “NW” which was the area where the expedition occurred. Inscriptions read “United States of America” and “$1”. The reverse was designed by Chris Costello and engraved by Joseph Menna.

The obverse design, which has been used in common throughout the series, features a portrait of Sacagawea and child. This design by Glenna Goodacre first appeared on the 2000 Sacagawea Dollar. Inscriptions read “Liberty” and “In God We Trust”.

Products available from the United States Mint include circulating quality coins from the Denver or Philadelphia Mint across thee different formats. There are 25-coin rolls priced at $32.95, 100-coin bags priced at $111.95, and 250-coin boxes priced at $275.95. The wrappers or tags include the date, mint of origin, face value of the contents, and the US Mint logo.

The Native American Dollar Program was authorized under Public Law 110-82 and launched in 2009. Previous annual themes have included Agriculture and the Three Sisters method of planting (2009), the Haudenosaunee or Iroquois Confederacy (2010), the Wampanoag Treaty of 1621 (2011), the spread of horse culture (2012), and the Treaty with the Delawares of 1778 (2013).

Forthcoming themes will include the Mohawk Ironworkers (2015) and Native American Code Talkers of World War I and World War II (2016).