Today, August 6, 2009, sales of the Julia Tyler First Spouse Gold Coins and separate Bronze Medals will go on sale at the US Mint. This will mark the third release of the series for this year and the eleventh release overall. 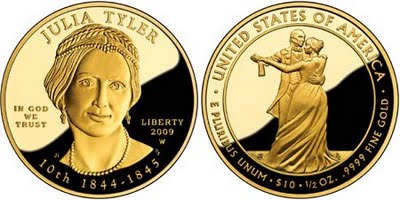 The obverse of the Julia Tyler First Spouse Coin features her portrait. The reverse of the coin features Julia and John Tyler together dancing at a formal White House event. Both sides of hte coin were designed by Joel Iskowitz and sculpted by Don Everhart.

The bronze medal will feature a likeness of the design used on the gold coins with the removal of some inscriptions. The medals will be priced at $3.50 and will not have any ordering limits.