On May 10, 2011, the United States Mint began sales of the latest Presidential $1 Coin & First Spouse Medal Set. This product has been offered since the beginning of the Presidential Dollars program in 2007 and features the $1 coin along with a bronze medal featuring the President’s spouse. 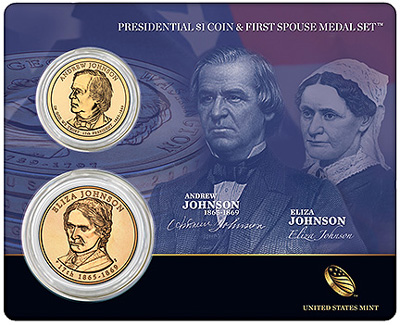 The $1 coin and bronze medal are mounted on a durable plastic card, which includes illustrations of the President and his wife on the front and issuance information on the back. Each set is priced at $14.95. Orders may be placed online at http://catalog.usmint.gov/

The 2011 Andrew Johnson Presidential Dollar was designed and sculpted by Don Everhart. The obverse design features a portrait surrounded by inscriptions indicating the name, order of the Presidency, years of the term, and motto “In God We Trust”. The reverse includes an image of the Statue of Liberty with inscriptions “United States of America” and “$1”. On the edge of the coin are the date, mint mark, and motto “E Pluribus Unum”.

The Eliza Johnson Bronze Medal carries the same design as the corresponding First Spouse Gold Coin. On the obverse is a portrait with inscriptions indicating the name, order of the Presidency, and dates of the term. The reverse features a scene from a children’s ball organized by Eliza Johnson for her husband’s 60th birthday.