The United States Mint has started accepting orders for the 2014 American Platinum Eagle Proof Coin. This represents the final coin within the Preamble series and features the theme “To Secure the Blessings of Liberty to Ourselves and our Posterity.”

The Preamble series has featured representations of six core concepts of American democracy as found in the Preamble to the Constitution. Each design has been inspired by a narrative written by Chief Justice John G. Roberts, Jr. Previous releases of the series have featured the concepts “To Form a More Perfect Union” (2009), “To Establish Justice” (2010), “To Insure Domestic Tranquility” (2011), “To Provide for the Common Defence” (2012), and “To Promote the General Welfare” (2013). 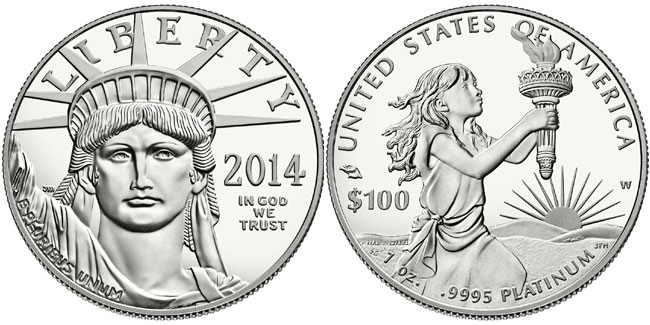 The reverse design for this year’s coin features a depiction of a young Lady Liberty holding her torch high to symbolize the hope and promise of America. The background contains an image of the sun rising over a gentle landscape. The inscriptions read “United States of America”, “$100”, and “1 oz. .9995 Platinum”. An American Eagle privy mark from an original coin punch located at the Philadelphia Mint is also included.

On the obverse is the “Portrait of Liberty,” which depicts Liberty looking towards the future in a modern interpretation of the Statue of Liberty. The inscriptions include “Liberty”, the date “2014”, “In God We Trust”, and “E Pluribus Unum”.

The 2014 Proof Platinum Eagle carries a maximum mintage of 15,000 pieces. There are no household ordering limits imposed. Each coin comes housed in a custom designed portfolio presentation case, containing the narrative which inspired the reverse design of the coin.

Initial pricing for the release has been established at $1,600. Pricing is based on the  United States Mint’s policy covering numismatic products containing gold and platinum. The price of the coin may be adjusted as frequently as weekly based on the average market price of platinum.