The United States Mint has started accepting orders for the 2013 America the Beautiful Quarters Silver Proof Set. This represents the first appearance of the five latest designs of the program and the first US Mint numismatic product of the year. 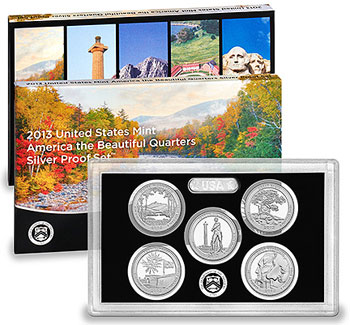 Each set includes five quarter-dollars struck in a composition of 90% silver and 10% copper. The coins are struck at the San Francisco Mint through a minting process which involves striking specially prepared blanks multiple times with specially polished dies. The resulting coins feature sharp relief, mirrored backgrounds, and frosted designs for a cameo effect.

The 2013 America the Beautiful Quarters feature the following designs:

The five coins of each set are packaged in a protective lens and outer box, accompanied by a certificate of authenticity. Each set is priced at $41.95 plus applicable shipping and handling. There are no stated product limits or household ordering limits. Orders may be placed online at http://catalog.usmint.gov/

Throughout the year, the 2013 quarters will also be released for general circulation and in various other numismatic products.