Today March 17, 2011, the United States Mint began sales of the 2011 America the Beautiful Quarters Proof Set. This product includes proof versions of each of the quarters issued for this year. 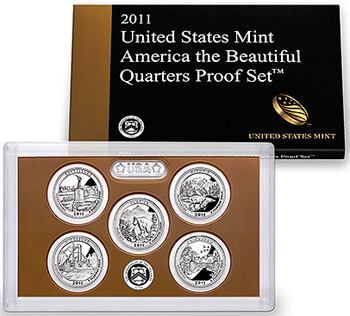 The proof versions of each coin are struck at the San Francisco Mint and carry the “S” mint mark.

There are no household ordering limits or announced maximum production levels. Sets are priced at $4.95 each, plus applicable shipping and handling charges.

The 2011 Proof America the Beautiful Quarters are also incorporated into the full 2011 Proof Set, which was released by the US Mint on January 11, 2011.