The United States Mint has started accepting orders for the 2012 America the Beautiful Quarters Circulating Coin Set. This provides collectors with an easy method for acquiring circulating quality examples for each of the year’s quarters.

The America the Beautiful Quarters Program was authorized under Public Law 110-192 and provides for the issuance of quarters with reverse designs representing a national park or site from each of the 50 states, 5 territories, and the District of Columbia in the order federally designated. The program began in 2010 and is scheduled to run until at least 2021, with five different designs released annually. 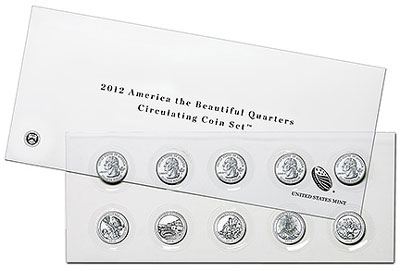 The circulating coin set contains circulating quality examples of each of the five quarters from the Philadelphia and Denver Mints. These ten coins are packaged in a holder which allows the coins to be easily removed for placement within an album or other storage option.

Each set is priced at $5.95 and may be ordered at http://catalog.usmint.gov/