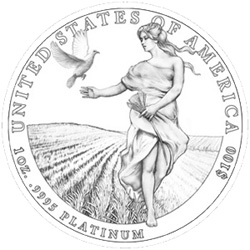 During the month of May 2011, many high ticket numismatic items will be released by the United States Mint. This will include three separate offerings of gold coins, as well as the only platinum coin currently produced by the Mint.

Tomorrow on May 5, the 2011-W Uncirculated Gold Eagle will go on sale. This is the collectible uncirculated version of the popular bullion coin bearing the classic Saint Gaudens Double Eagle obverse design. Each coin is struck in 22 karat gold and contains one troy ounce of gold.  The US Mint has not issued this version of the coin since 2008. The offering was delayed and eventually canceled for each of the past two years, as the US Mint struggled to meet bullion demand.

On the same date, the Eliza Johnson First Spouse Gold Coins will be released. This is the latest issue in the ongoing series featuring the spouses of the former Presidents of the United States. These coins are struck in 24 karat gold, contain one-half ounce of gold content, and are available in proof or uncirculated versions.

A few weeks later on May 19, sales of the 2011-W Proof Gold Buffalo coin will begin. This one ounce 24 karat gold coin features the classic obverse and reverse designs of James Earle Fraser’s Buffalo Nickel. The proof Gold Buffalo has been released each year since 2006 and remains a favorite of many collectors.

To finish the month, on May 26, the 2011-W Proof Platinum Eagle is scheduled to be released. This coin is struck in .9995 purity and contains one troy ounce of platinum. For the past two years, the reverse designs have highlighted the core concepts of democracy as stated in the Preamble of the Constitution. This year’s design will portray the concept “To Insure Domestic Tranquility”. The final reverse design has not yet been announced, but one of the leading candidates appears above.

Pricing for each of the gold and platinum products will be determined based on the average market price of the metals in the week leading up to the release.

A listing of all currently scheduled US Mint product releases appears below.