On May 19, 2011, the United States Mint held an official launch ceremony to mark the release of the Presidential $1 Coin featuring the 18th President, Ulysses S. Grant. The ceremony was held at the Ulysses S. Grant National Historic Site in St. Louis, Missouri.

The date of the ceremony and circulation release coincide with the 148th anniversary of Grant’s Vicksburg campaign during the American Civil War. 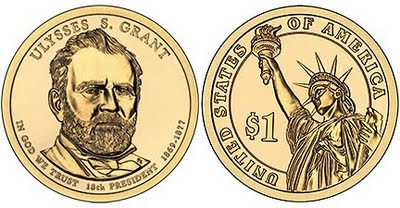 The obverse of the Ulysses S. Grant Presidential Dollar features a portrait designed and sculpted by Don Everhart. Inscriptions include the order of the Presidency “18th”, years of the term “1869-1877”, and the motto “In God We Trust”. The reverse design features an image of the Statue of Liberty, also designed by Everhart. Incuse edge lettering includes the date, mint mark, and motto “E Pluribus Unum”.

Al Runnels, the Acting Deputy Director of the United States Mint, and John Marszalek, the Executive Director of the Ulysses S. Grant Association, were both in attendance at the launch ceremony, which was open to the public. Children who attended received a free $1 coin to commemorate the day. Others were able to exchange currency for fresh rolls of Ulysses S. Grant Presidential Dollars. 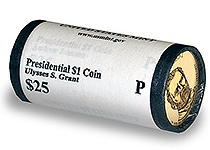 At 12:00 Noon ET, the US Mint began sales of numismatic rolls of the Ulysses S. Grant Dollars. The 25-coin rolls are available from either the Philadelphia or Denver Mint facility. They are packaged in wrappers which indicate the President’s name, face value, and mint mark of the coins. Each roll is priced at $39.95 and can be purchased at http://catalog.usmint.gov/

The coins should also be available through the channels of general circulation. Federal Reserve Banks have provided financial institutions with a special ordering period from April 28 to June 2, 2011 during which unmixed quantities of the Ulysses S. Grant Presidential Dollars may be ordered.