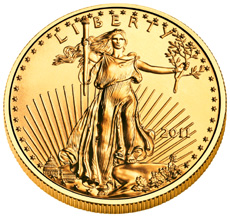 Sales of the United States Mint’s gold and silver bullion coins retreated from the levels of the prior month. With half of the year completed, American Silver Eagles remain on pace to establish a new annual sales record.

During June 2011, the United States Mint offered the 22 karat American Gold Eagle bullion coins across four different weights and the 24 karat American Gold Buffalo in one ounce size. Silver bullion offerings included the one ounce American Silver Eagles and the five ounce America the Beautiful Silver Bullion Coins. These bullion products are distributed by the United States Mint through a network of authorized purchasers who are able to order the coins based on the market price of the precious metals plus a fixed or percentage mark up.

For the month, gold bullion sales reached 67,000 troy ounces across all available options. This was down sharply from the previous month when sales totaled 122,500 ounces and also down from the year ago period when sales had reached 185,000 ounces.

For the year to date, gold bullion sales across all options are now 655,500 ounces. If the same sales can be achieved in the second half of the year, annual sales would exceed last year’s total of 1,220,500 ounces.

Silver bullion sales were impacted by the continued slow down in sales for the recently introduced America the Beautiful Silver Bullion Coins. When the first two designs of the year were released in April, the US Mint sold 225,400 of the 5 ounce coins. With the next design released in May, monthly sales were 108,700 units. For June, sales were only 19,000, despite the release the fourth design and continued availability of the third design.