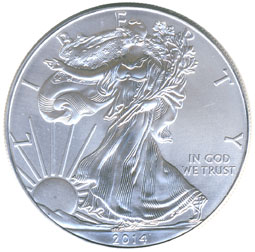 The United States Mint’s bullion sales were mixed during February 2014, with gold sales falling and silver sales rising compared to the year ago period.

Sales of the American Gold Eagle bullion coins measured 31,000 ounces during February. This was down sharply from the prior month when sales had reached 91,500 ounces and also down from the year ago period when sales were 80,500 ounces.

The latest monthly sales total is the lowest since September 2013. Demand for newly minted gold bullion coins was reportedly impacted by a surge in secondary market sales of coins purchased a few years ago.

The 24 karat American Gold Buffalo bullion coins recorded sales of 12,000 for the month. This amount was down from the prior month sales of 41,500 ounces, and roughly flat with the year ago period sales of 11,500 ounces.

The United States Mint continues to offer Silver Eagles under their allocation program, which rations available supplies amongst authorized purchasers. The coins have been subject to allocation for more than a year. As such, the monthly sales figures are not necessarily a reflection of the market demand for the coins, but moreso a reflection of the supply of new coins available. Authorized purchasers have continued to rapidly exhaust the weekly allocations of coins made available by the Mint.