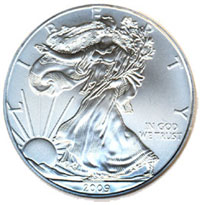 High demand for precious metals continued to drive strong sales for United States Mint bullion products. During the month of November 2009, the US Mint offered one ounce American Silver Eagles, one ounce American Gold Eagles, and one ounce 24 karat Gold Buffalo bullion coins. Towards the end of the month, the US Mint was forced to suspend sales for the Gold and Silver Eagle bullion coins due to depletion of their current inventory. Sales of these bullion coins are expected to resume in early December.

The US Mint sold a total of 191,500 ounces of gold through their the two gold bullion offerings. This was divided as 124,000 of the one ounce Gold Eagle and 67,500 of the one ounce Gold Buffalo. The year to date sales for the 2009 Gold Buffalo bullion coin now exceed the sales levels achieved for 2007 and 2008. This even more notable due to the fact that the 2009 dated coins have only been available since October 15, whereas the prior two year’s coins had been available throughout the year.

A total of 2,586,500 of the one ounce Silver Eagle coins were sold before the sales suspension was imposed late in the month. This represents the fourth highest monthly sales total for the year. The year to date sales total is now nearly 26 million, representing a new all time high for annual sales. The previous record high was achieved last year when 19,583,500 coins were sold.

In December, the US Mint is expected to begin sales of fractional Gold Eagle bullion coins. For more than one year, production has been restricted to the one ounce version of the coin. The addition of fractional coins will add a new dimension to bullion sales as the smaller sized coins will provide finally options to accommodate different investment levels.