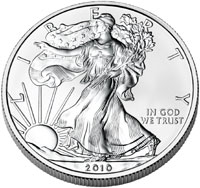 By comparison, the US Mint has experienced a much more modest decline in gold bullion sales and an increase in silver bullion sales.

The table below presents sales figures for United States Mint bullion coin sales for March 2010, along with year to date sales totals. This report includes bullion coins sales only and does not reflect numismatic product sales, which are reported separately.

The dark lining to the strong performance of the US Mint’s bullion coins is the doubt cast upon the status of related collectible offerings. Unless the US Mint is able to satisfy the full public demand for bullion coins, they will not produce collectible proof and uncirculated Gold and Silver Eagles. These offerings were canceled for 2009 to the disappointment of many collectors.