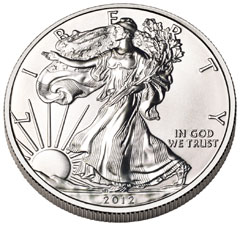 This article continues coverage of the US Mint’s 2012 financial results.

The United States Mint manufactures and issues bullion coins through a network of authorized purchasers in bulk quantities based on the market price of the metal plus a premium. The authorized purchasers distribute the coins more broadly to the public and facilitate a two way market. Current US Mint bullion products include the American Gold Eagle, American Silver Eagle, American Gold Buffalo, and America the Beautiful Silver Coins. The weight, content, and purity of all bullion coins are  guaranteed by the United States government.

The single product which showed an increase in revenue was the 24 karat American Gold Buffalo, up by 15.73% from the prior year. The gain was attributed to the availability of the coins throughout the fiscal year. In the prior year, the coins only became available in March.

Both the American Silver Eagle and America the Beautiful 5 oz. Silver Bullion Coins yielded operating losses during for the fiscal year. The two gold bullion programs did manage to generate net income which more than offset these losses.

Silver Eagle bullion coins generated a loss of $4.4 million on revenue of more than $1.1 billion. The loss was related to the production which took place at the San Francisco Mint. During periods of low numismatic sales, the Silver Eagles carried a large portion of the San Francisco facility overhead costs. The impact was magnified by the lower bullion sales volumes, which meant spreading the additional costs over fewer units sold.

America the Beautiful 5 oz. Silver Bullion Coins generated a loss of $0.5 million on sales of $14.3 million. After demand for the coins exceeded production quantities for the 2010 inaugural year, the US Mint significantly increased production for the 2011 releases. The first two designs for this year sold out, however orders for the final three designs received substantially fewer orders. During the 2012 fiscal year, the US Mint recorded a one time expense to write down approximately 842,000 ounces worth of inventory which were deemed “unsellable.” Production quantities were scaled back for the 2012 releases.

In the previous fiscal year, the ATB Silver Bullion Coins had generated net income of $3.0 million on revenue of $110.0 million.