NGC’s Early/First Release and PCGS’s First Strike® designations should be simple enough to understand. Both top grading companies generally require submissions to be received no later than 30 days from the coins’ official release, although for certain products additional criteria may apply.

As an example, NGC lists on its Early/First Release page that March 22, 2012, is the cutoff date for mint state and proof versions of the US Infantry Soldier Commemorative Silver Dollar. PCGS, in its First Strike® page, lists March 20, 2012 as the cutoff date for the same coin.

The point here is to check each company’s page for the cutoff date and “generally” try to get it to the destination before time expires for the label. 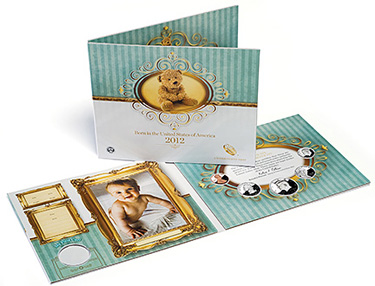 The 2012 Birth Set includes these coins:

The quarter was released earlier this year, and the cent, nickel, dime and half dollar have not yet been released in the 2012 Proof set. So how do we know what and when to submit so we can garner an Early/First Release or First Strike® label with the appropriate pedigree?

Keep those concepts in mind to learn how NGC will go about designating 2012-S Birth Sets.

(By the way, PCGS has yet to post any instructions on the product. We were advised to check the page if the company decides to label and pedigree Birth Sets.)

NGC says that the clad proof quarter dollars in the Birth Set already has been released; so it will recognize the same quarter from the Birth Set as “Early Release/ Birth Set,” provided the coin is received in the sealed blister pack within the 30-day period. The other four coins also will receive “Early Releases/ Birth Set” labels.

NGC says the half dollar, dime, nickel and cent in the Birth Set are “pre-released” coins. That makes them, technically, a Pre-Release/Early Release.

Anyway, when the complete 2012 proof set is released later this year by the US Mint, NGC will still recognize Early Releases on all those coins except for the quarters, which were already sold as part of a January proof set. These quarters will not receive a pedigree and will be labeled, simply, “Early Releases,” allowing a collector or dealer to distinguish coins as part of the Birth Set or as part of a regular proof set.

No 2012-S coin by the U.S. Mint can earn all three different Early/First Release NGC labels.

We think the answer is “True” for each question above. (Correct us, if we’re wrong.) The point is, both NGC and PCGS seemed to have devised a simple rule for designating Early/First and First Strike® releases. The Birth Set really is a pre-release of sorts, and that has complicated the entire process of labeling.

The US Mint is free to pre-release any coins, and the Birth Set idea is a good product, in that non-hobbyists may be tempted to purchase the sets, replete with “spaces for a welcome message and the day/time of the birth and length/weight of the baby, a baby photograph and a lock of the baby’s hair.”

Some may deem these as collector items; but the coins as packaged were not designed for that sort of thing. For example, the US Mint in 2000 produced Special Edition Ornament Sets featuring Sacagawea dollars in tree-hangable bezels. Those were not packaged for grading company labels but for for the holidays, a special occasion, such as the birth of a child.