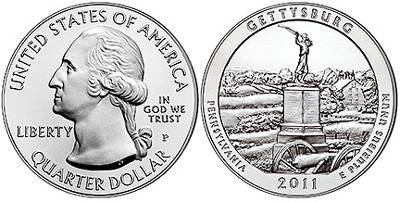 The product represents the sixth numismatic release for the America the Beautiful Five Ounce Silver Coins. The obverse design features the 1932 portrait of George Washington designed by John Flanagan, and the reverse design features the 72nd Pennsylvania Infantry Monument. Each coin contains 5 troy ounces of .999 fine silver and has a diameter of 3 inches.

In the days following the release, the market price of silver fell dramatically. Around mid-day on September 26, the US Mint suspended internet sales for the product and posted the message: “This product is temporarily unavailable for product repricing.”

At this time details, information on the new pricing is not yet available.

Generally, in order to establish new prices for silver numismatic products, the US Mint must publish new prices in the Federal Register. This process can take several weeks, during which sales typically remain suspended. Numismatic gold products are covered by separate policies, which allow weekly pricing adjustments based on the average market price of gold.