Yesterday, September 1, 2011, the United States Mint began sales of the Lucy Hayes First Spouse Gold Coins. Today, sales of the coins were suspended, following a sharp rise in the market price of gold. Such suspensions have become commonplace, as the US Mint’s policy of weekly changes for precious metals products cannot keep up with the rapid shifts in the market price of gold. 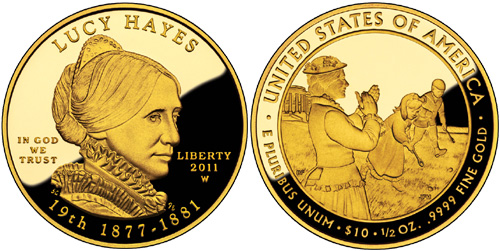 The Lucy Hayes First Spouse Coin honors the spouse of the 19th President, Rutherford B. Hayes. The obverse of the coin features her likeness designed by Susan Gamble and sculpted by Don Everhart. The reverse design depicts Lucy Hayes participating in the first Easter Egg Roll held at the White House. This was designed by Barbara Fox and sculpted by Joseph Menna. Each coin contains one half ounce of 24 karat gold.

Both proof and uncirculated versions of the coin were available, with a maximum mintage of 15,000 pieces across both options. There were no household limits in place for the offering.

The US Mint’s pricing policy covering the coins calculates the average weekly market price of gold based on the London Fix prices from the prior Thursday AM to the current Wednesday AM. Prices changes are implemented around mid-morning Wednesday. It seems likely that sales of the Lucy Hayes coins will remain suspended until the US Mint is able to adjust prices next week on Wednesday.