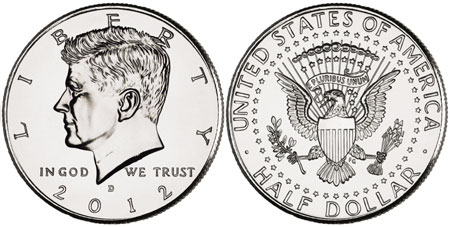 The Kennedy Half Dollar was introduced in 1964 and features a bust of President Kennedy on the obverse designed by Gilroy Roberts. The reverse features the Presidential Seal as designed by Frank Gasparro. Since 2002, half dollars have not been produced for general circulation, but have only been produced in the limited quantities necessary to fulfill demand from collectors.

Available products include a 200-coin bag and two roll set. The bags, which contain 100 coins each from the Philadelphia and Denver Mints, are sewn shut with an indication of the mint marks, date, and face value of the coins. The price is set at $139.95 per bag.

The two roll sets contain one 20-coin roll each from the Philadelphia and Denver Mints. The coins are contained in custom designed wrappers which include US Mint branding, the date, mint mark, and face value of the coins. These are priced at $32.95 each.

Orders for either product may be placed online at http://catalog.usmint.gov/