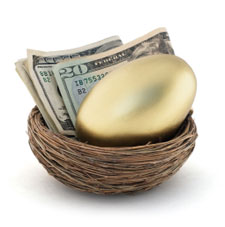 Many of you are already aware that back in the early 1990s there was discussion about changing private retirement accounts so that the US government could accelerate getting its hands on some of these assets.  Back then the idea was to impose a one-time 15% tax on existing private retirement plan assets and a 15% tax on any new contributions to such plans in return for making later retirement distributions exempt from income taxes.  This plan was being pushed by the White House and the Democrat-controlled Congress early during President Clinton’s first term.  After the Republicans gained control of Congress following the 1994 elections, no further progress was made on this plan.

As long as a Republican was in the White House or at least one chamber of Congress was controlled by the Republicans, the idea of seizing private retirement account assets stayed dormant.  However, I have continued to warn my readers that this multi-trillion dollar pile of assets was too large for the US government to keep its hands off of forever.

The dormancy ended in anticipation that the Democrats would gain the White House and control of both chambers of Congress in the 2008 election.  On October 7, 2008 the House Committee on Education and Labor held hearings titled, “Saving Retirement in the Face of America’s Credit Crisis:  Short and Long Term Solutions.”  The focus of the hearing was a presentation by Teresa Ghilarducci, an economics professor from the New School for Social Research.  You can read her testimony at http://edlabor.house.gov/testimony/2008-10-07-TeresaGhilarducci.pdf. [Editor’s note: It appears that the written testimony is no longer available at this location. Go to http://frwebgate.access.gpo.gov/cgi-bin/getdoc.cgi?dbname=110_house_hearings&docid=f:44713.pdf for Professor Ghilarducci’s testimony included within a printed version of the full hearing.]

As part of the plan, at retirement, the assets of the plan would be turned over to the US government, which would then pay an annuity to the retiree.  The retiree’s heirs would not receive the residual assets upon the death of the retiree.  To overcome public resistance, Ghilarducci advocated that this program begin as an optional and voluntary conversion to government accounts and annuities.

In effect, Ghilarducci was advocating a series of small steps that would eventually result in the US government seizing all private retirement account assets and replacing them with US government bonds, under the guise of “retirement income protection.”

The Democrats did take control of Congress and the presidency in 2008.  So, in mid-September 2010 the Departments of Labor and Treasury held hearings on the next step toward achieving Ghilarducci’s goals.  The stated purpose was to require all private plans to offer retirees an option to elect an annuity.  The “behind-the-scenes” purpose for this step was to get people used to the idea that the retirement assets they had accumulated would no longer be part of their estate when they died.

Then the 2010 elections brought the Republicans back in control of the House of Representatives.  As part of my Ten Fearless Forecasts for 2011 in the January 2011 issue of Liberty’s Outlook, I predicted “I suspect that further progress on nationalizing private retirement accounts will be slowed, but will not stop entirely.”

That prediction has now come true.  In the political wrangling over raising the federal debt ceiling, the Treasury borrowed so much money that it exhausted its authority to borrow additional funds.  In a purely political move, the Treasury has started borrowing funds from the federal employees’ retirement program in order to continue deficit spending in anticipation that the debt ceiling will be raised by August.

I can see the political argument now.  “Why should federal employees be the only workers whose retirement assets are ‘temporarily’ loaned to the US government to help avert a fiscal crisis?  Why not force private retirement plans to carry their ‘fair share’?”

But that isn’t the only new development towards the US government controlling private retirement account assets.  On May 18, Senators Herb Kohl (D-WI) and Herb Kohl(R-WY) introduced S. 1020: Savings Enhancement by Alleviating Leakage in 401(k) Savings Act of 2011”, referred to in short as the SEAL 401(k) Savings Act.

The sponsors noted that the 401(k) plans in total are currently underfunded by $6.6 trillion dollars needed to provide reasonable retirements to the retiring workers.  This problem is getting worse because approximately 28% of the retirement plan assets consist of loans made to the beneficiaries.  In today’s difficult economy, more people are seeking such loans and a growing number for these debtors are defaulting on repayment of these loans.  These defaults are described as “leakage” that is reducing the amount of assets available to pay retirement benefits.

While this new legislation provides some extended repayment relief for those borrowers from their 401(k) plans who have lost their jobs, the basic point of the Bill is to restrict the ability of retirement plan beneficiaries to borrow against their future retirement benefits.  For instance, Section 4 of the Bill prohibits making loans through the use of credit cards and other similar arrangements.

Make no mistake, the provisions of this Bill, under the pretense of supposedly helping to protect future retirement benefits, are really making it more difficult for people to gain access to what is supposedly “their assets.”  If this Bill becomes law, it will be one more step toward putting private retirement plan assets under the control of the US government.  Unfortunately, such a move is just one more bit of evidence of the US government’s bankruptcy and shakiness of the value of the US dollar.

The governments of Argentina and, I believe, Hungary have already nationalized (seized) private retirement accounts, so don’t think it can’t happen here.

These two steps toward nationalizing private retirement account assets are simply more reasons to do what you can to move your assets out of the US dollar and beyond the reach of the US government.  Physical gold and silver in your direct possession are perfect alternatives to gain this self-protection.