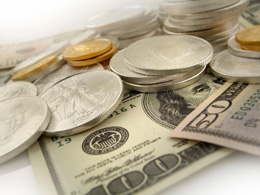 The COMEX August gold options expired Tuesday this week.  At the COMEX close that day, there were 18,900 open call contracts giving the owner the option to purchase a 100 ounce gold bar at a strike price of $1,600 per ounce.  Since the price of gold closed well above that price at the COMEX close that day, that would be an incentive for holders of these call options to pay for all 1,890,000 ounces of gold to take delivery so that they could either sell it at a profit or continue to hold the metal.

There was an effort to knock down precious metals prices during US trading hours Tuesday, to no avail.  But, that didn’t mean that the US government had used up their bag of tricks.

Precious metals prices started to take off Wednesday morning.  Gold reached almost $1,630 and silver peaked near $41.50.  On Wednesday afternoon and on into Thursday there were continuing efforts to suppress gold and silver prices, with better success than on Tuesday.  Although silver fell below $40, gold only fell near to $1,600.

Although it might seem a bit convoluted, there is a purpose in knocking down gold and silver prices after the options expired.  Imagine if you were a trader who converted your $1,600 call options into commodity futures contracts.  At the time of conversion, you were sitting on well over a $1,000 paper profit for an option that you probably only paid $200-300 to purchase.  If the price of gold fell far enough in the next 24 hours to wipe out almost all of your profit, you would not be pleased.  You would be tempted to close out your position to look for another asset that you consider less risky.  You also might hesitate to make another purchase of gold call options.

That the US government would attempt such a tactic is a plausible idea.  I can neither prove nor disprove that this is what has actually occurred.  The available trading data indicates that this price suppression strategy might actually have happened.

No matter whether precious metals prices were manipulated downward on Wednesday and Thursday or they declined for other reasons, I expect this to be a short-term buying opportunity before prices head back up.  I fully expect that there will be some kind of last minute “patch” to smooth over the US Treasury borrowing up to the debt ceiling next week.  As this happens, I would not be surprised to see another major effort to knock down gold and silver prices (along with a rise in the value of the US dollar and a mini-surge in US stock prices).  But, once we get past these theatrics, which will ultimately do nothing to resolve the US government’s actual deficits and overspending, expect precious metals to lead the way upward.

Much has been made of the just revealed Federal Reserve’s $16 trillion of secret loans to support US and international banks and financial institutions in the past few years.  When Rep. Ron Paul’s (R-TX) 2010 effort to enact legislation calling for a thorough audit of the Federal Reserve was being ignored by the then Democratic House leadership, Senator Bernie Sanders (I-VT) was able to insert in the Dodd-Frank financial overhaul legislation a provision for a partial audit of the Federal Reserve.

The Government Accountability Office (GAO) released their 266-page audit report last week.  You can access it online at http://sanders.senate.gov/imo/media/doc/GAO%20Fed%20Investigation.pdf.

While the GAO generally gave a clean (enough) evaluation of the different bailout programs, it did note that most of the bailout programs were handled by private contractors rather than the government itself.  In all, the Fed paid more than $650 million in fees to these contractors to administer the bailouts, with the bulk of the fees generally paid to institutions on a non-competitive bid basis.

The GAO also noted some instances where people with conflicts of interest were allowed to participate in decision making for both sides.  Two specific examples cited were the JPMorgan Chase CEO serving on the Federal Reserve board that extended a $390 billion bailout to JPMorgan Chase and William Dudley (now president of the Federal Reserve Bank of New York) being allowed to maintain shareholdings in institutions to which he voted to give bailouts.

What was really shocking was the wide range of beneficiaries receiving bailouts.  For example, on page 216 of the audit report is a list of the 18 largest borrowers under the Primary Dealer Credit Facility program, which dispensed $7.39 trillion of secret emergency funding.

The top five recipients under just this one program were:

Among all the bailout programs, Sen. Sanders reported that Citigroup received more than $2 trillion in bailouts and that Merrill Lynch received over $1.9 trillion.

Even though the report is extremely difficult to read and understand the bigger picture, it is readily evident why both the Federal Reserve and major financial institutions fought so strongly against being forced to make these revelations.  Citigroup, for instance, would much rather the public only knew about the $300 billion of bailouts that were publicly reported at the time.  If the public realized the full extent that the Federal Reserve subsidized the bank, there would likely have been widespread panic and a collapse of the US financial system.  Instead, by keeping most of these transactions secret until this month, the risk of collapse has been pushed into the future.

Over the next week, whatever may be reported as “good news” will be lies.  Don’t fall for it.  And definitely don’t close out your gold and silver positions.